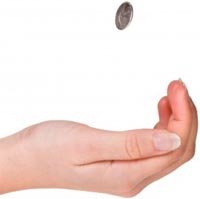 Sitting at a table, having people on either side of you and across from you. Divide your group into two teams.  One team at a time takes a turn passing a quarter under the table carefully so that the people across from you on the other team can’t see where the quarter is.  Then at any time the other team that doesn’t have the quarter tells you to stop!   They either yell “CREEPERS”, All the people on the team that has the quarter must bring both hands up on the table and slowly try to open their hands with their palms down trying not to allow the quarter to drop loudly. The opposite team tries to guess where the quarter is.  If the opposite team calls  “SLAMMERS”   then everyone on your team brings their hands up quickly slamming them down with palms down and open.  The other team tries to guess who has the quarter.  Just take turns until you are tired of playing.  It is a lot of fun and everyone can join in. The winner is the team with least number of guesses to find the quarter.