Print this POEM! Have all baby shower guests sit in a circle. Give one of the guests a wrapped gift. Then read the following story. The guests 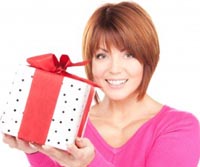 pass the gift to the person on either their right or left, depending on what is said in the story. Each time the reader says RIGHT, the gift would be passed to the RIGHT, likewise, when LEFT is said, the gift is passed to the LEFT… Whoever has the gift by the end of the story, wins the gift!

Mr. WRIGHT prepared to take Mrs. WRIGHT RIGHT to the hospital as she just went into labor. As he LEFT in the car, he turned RIGHT out of the driveway. He had to go RIGHT back home because he LEFT Mrs. WRIGHT at home. They both got in the car on the LEFT side as the RIGHT side door wouldn’t open. Mr. and Mrs. WRIGHT again LEFT for the hospital, turning RIGHT out of the driveway. An argument occurred about the RIGHT turn, as Mrs. WRIGHT said that Mr. WRIGHT should have turned LEFT. Mr. WRIGHT kept insisting that he was absolutely RIGHT, but Mrs. WRIGHT kept insisting that the hospital entrance was on the LEFT. Two blocks away after another LEFT turn they discovered they had LEFT Mrs. WRIGHT’s over night bag at home. So they made a LEFT turn, then a RIGHT to go back home to where they had LEFT the bag. As they turned RIGHT on to their street, Mrs. WRIGHT said “Let’s just go RIGHT to the hospital and send someone else RIGHT to the house for the fact that we LEFT the bag on the couch”. They went LEFT at the next block and turned RIGHT back around. Finally at the hospital Mr. WRIGHT pulled up to the front where he LEFT his wife to go RIGHT in. Inside the hospital they wheeled Mrs. WRIGHT away. “Where is my fie? I only LEFT her for a minute!” Exclaimed Mr. WRIGHT. A nurse rushed him RIGHT down the hall, they made a LEFT turn, then a RIGHT, and a LEFT turn again. Mr. WRIGHT, found Mrs. WRIGHT already in delivery. But he then realized that he had LEFT the video camera in the car. RIGHT away he ran out of the room and back to the car. Not only had he LEFT the camera but he had LEFT the lights on too. Mr. WRIGHT wasted no time, her ran RIGHT back to his wife’s room. As Mr. WRIGHT walked in all he heard was screams from his wife because he had LEFT her room and was no where in sight. I’m sure you can guess what happened next. As Mrs. WRIGHT had the baby Mr. WRIGHT passed out on the floor. But when he came to he got a shock once more. For there he saw Mrs. WRIGHT embracing their new little bundles of joy. With two babies on her LEFT and one on the Right, Mrs. WRIGHT turned to her husband and said “there is one thing LEFT to do, I think we should name these WRIGHT babies, how about you?